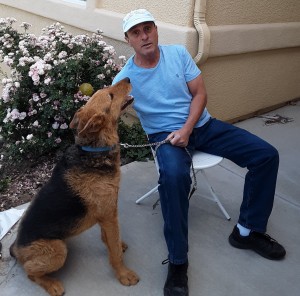 We just got back from a nice two-mile leash walk in the Riparian Preserve off Highway 89. She still looks pretty good, don’t you think?

I didn’t learn my lesson. I kept taking Rosa on big off-the-leash hikes in the woods. And she kept getting separated from me. I’m lucky I still have this dog.

Aside from the clear signs of fatigue, she has a strange tremor in her rear flank, in or under her buttock. I wondered if that defect made it hard for her to go distances, despite her earlier athleticism. How she got this tremor I don’t know. Did it happen when she bolted down the rain-slick deck steps and sprained something? Or was it a congenital problem related to a flaw in the breeding?

I wonder about those folks we got her from. She’d been one of the last remaining pups. There was something forlorn about her as she wandered the floor of their Dewey house. That forlorn quality made me choose her.

I am exercise obsessed, and the long hikes went apace. As did the scares.

One time I set off from the main trail head off the White Spar parking lot, swung left onto trail 305. Destination: Goldwater Lake. Four miles later I got to the lake, but where was Rosa? I figured she was prowling around looking to steal people’s hot dogs.

Humping my pack, I walked up and down the area, asking people at picnic benches, or casting lines into the water, if they’d seen my brown and black dog.

I’d double back to where I thought they were pointing. Still no dog.

I walked here, I walked there.

An hour had elapsed since I’d got to Goldwater Lake. Finally, legs folding under me, I shrugged and started home. Figured the phone would ring, as it had rung before: someone having read her tag. “We have your dog …” But, as I commenced the guilt-ridden trudge back, I found I couldn’t go on. I would never live with myself if weary legs cost me this dog.

I turned around and headed back.

This time I hiked all the way up to the parking area. Way, way up there.

There’s a little stand where a park employee takes money from day users out the windows of their rides as they roll in.

I heard her before I saw her. Baying piteously, she was roped up to the intake hut, having been secured by the admissions guy. I fell on her, rubbed her bony ribs, hugged her. I saw how skinny she was. She hadn’t forgiven me. She pranced and whined and tossed her head and kept barking, mad at me.

I had her back on my leash. The four-and-a-half miles back to my SUV flew by.

Two bone-tired animals got home. I almost didn’t get out of the bathtub. I had to have walked twelve miles, if not more, that day.

I still didn’t get it.

Once we set off from a trail head down Senator Highway a mile from the entrance to Goldwater Lake. I’d intended to get us clear to Walker Road, then turn back. An eight miler.

Same deal: I completed the round trip, and no dog. I headed back up the trail, still no dog. I went back to my car and drove home. Figured I’d go back later, she might be prowling around the parking lot.

The phone rang. A gal had found her at the White Spar campground’s trail head, a place many miles from where we’d set off. I went and got her, endured a lecture about proper, humane dog management. “She’s starving and thirsty,” said a woman who, as it turned out, was in the business of rescuing dogs, and was married to a vet.

It wasn’t the only time I’d been told I was starving my dog, denying her water. People were beginning to suspect me of animal abuse.

Something was wrong. The pup that had charged up Granite Mountain, run back down, and been ready to jump into the car for the ride home was no more. The long hikes tired her. This was getting dangerous.

One day she lay down beside her food dish, unable to eat.

I went and looked. She was sick. Lying on her side, food untouched.

“This is not the same dog,” observed the vet.

Poor Rosa tested positive for two fatigue-producing illnesses: valley fever and Lyme disease. I was in a frenzy of fear and worry, dreading the loss of this wonderful dog. I called the vet nearly in tears when she’d returned Rosa to us, with our assigned program for her. That vet held my hand over the phone. “One never knows, but I have a feeling your dog will be running and romping just like the pup you love. But you must restrict the hikes. The big danger is tiring her any more. She lacks the defenses at present.”

With some expensive pills, and rest, Rosa fought her way out of the doldrums. Airedales are fighters.

I cannot describe my relief. The vet said older dogs often cannot work their way out of the kind of double-bind deficit our dog was in. Dogs can die from this.

Causation can be elusive. She may have got hold of something out there, like a diseased bone, or slurped mosquito-infested stagnant water. Lots of things could have happened.

But that’s not to deflect blame.

The big, long hikes are over. I’ll take her to White Spar, let her off the leash, stroll a mile up, collect her easily, and leash her up for the slow walk back. I don’t lose her anymore. And during the brief, managed off-leash portion, she’ll have had plenty of time to run up and down the trail and chase up hills after perceived varmints.

We still play “stick”: She bounds up to me on the trail, ears back, alert at seeing me holding a perfect flinging stick I picked up. I throw it way up ahead of her. She bounds after it and grabs it in her teeth.

Runs twenty or thirty yards further ahead before dropping the slobbered thing.

Bemused, I walk on, glad to have her back. Glad I still have her.

Two successive vets by this time swore me and Barb to put some weight on her, so we did. I still don’t want her to get fat, though.

I am a lonely old man who needs his dog. It’s gotten damn hot out, and she loves just lounging around in the air conditioning. Best time to walk her is just after dawn.

She’s a nice companion to retire with. When we come in from a hike, even a short, sensible hike, and she is pooped and wants to plop down somewhere and snooze, I let her.

You don’t want to interrupt her while she sleeps, but sometimes when she’s got her eyes open, I’ll come by and stroke her fur. She groans contentedly, licking me.