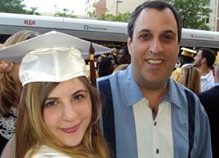 My brother with his daughter Emily at her high school graduation

I call him Fatman for some reason. He was a bag of bones when he was a kid, and he had an outie. I remember that. I remember how happy we were as brothers.

My affections ran to excess, as did my temper. I used to throw him down the stairs. He never got mad. He didn’t have to. He would one day beat me in tennis. Regularly. That was enough.

I used to wonder whether he admired me. I found out he did, though in the dubious, time-honored way little brothers regard the accomplishments of their elders. When I was a teenager feeling up a girl downstairs, I could have sworn I felt the presence of a spy. Later, Marty confessed he’d crept down in the dark and peeped over the rail.

I always felt protective of him. One time I came by just when a neighbor boy my age, in other words three years older than Marty, asked him to do something indecent. I steered Marty away. I’d have bloodied anyone who harmed my brother. I had a Holden Caulfield ferocity about protecting his innocence.

Lisa, the oldest of us, used to rib Marty.

“You know, they didn’t want you,” she’d say, referring to the fact (as confessed by my mother) that Marty, after three intended kids, had been unplanned.

“And what a great surprise it was!” Mom would say, glancing hotly at Lisa every time she had to explain this.

Mom barely bore the strain of managing all four of us. A lot of the job of mothering fell to my mother’s mother, our Yiddische bubbe, who didn’t have it easy. “Vild Eendience!” she would howl when we were all screaming and jumping at once. I even imagine the cleaning lady, Mae, through the window of infant memory, changing diapers and bearing some of the burden herself.

My mother warmed and honored the lives of all who knew her. She held not only the marriage but the family together. She was not about making us clean our room. She would later confess she and my dad had not done enough discipline. But there was a quiet fire about her that transcended such prosaic concerns.

My father was, well, like me. Intense, preoccupied, ideologically driven. He had emerged from passionate leftism, gone into the Big War, seen much that was ugly and disillusioning, lost a father and mother and two brothers, endured much loss. There was something distant about him, even though he was the patriarch of the prototypical hugging family. He gave us life, sheltered and fed us, had a whimsical nature. He spoiled us in fancy restaurants, took us to England and Europe.

Lisa said I lived out my father’s shadow. Maybe that’s right. I didn’t sell my novel either. She also said my father terrified me from an early age, so early I could not even remember it. That could be true too.

But I remember an unwitting brutality that fell on Marty worse than on any of us. The crazy rage my father went into when Marty left his shoe on the playground of Sunday school … ah, Meyer Levin Sunday School, where red diaper babies heard about Jewish history and sang civil rights songs and tried to learn some Yiddish. We should have paid attention to that last; it may have helped us keep our parents and grandparents from talking about us behind our backs without leaving the room.

Marty was the forgotten one. It happens a lot to the youngest.

I always felt him a complement to me. When I went off to New York and further confusions than the ones I already knew, I came back declaring some sort of acidhead major in religion.

Marty said, “Why did you study that?”

He went to Ohio University, the “party school,” and was a stoned fuck-up too, but at least he came out with a journalism degree, something you could use.

He would ply that trade well and become a successful writer, a bold, shameless freelance hustler.

Marty eschewed my unwonted seriousness. He went the other way, into refusal to furrow his brow – though, in an act of scholarship I never expected of him, he did take on The Rise and Fall of the Third Reich and became an expert on the Einsatzgruppen and Hitler’s whole cast of accomplices.

I was thinking about blogging about Harvey Pekar, the self-described “working-class intellectual” who celebrated his proletarian existence in a series of Cleveland “comics” called American Splendor. And maybe now’s the time. Marty and I were living “at home,” sharing the same little bedroom, when Marty saw my issues of Pekar’s work. Marty was considering doing his own comics — funny, cartoonish comics — and went to see him.

He came home with the sarcastic report, “Real fun guy.” Adding, “Oh. He wants to meet you.”

This may not have been so much because I was a fan as that Marty had divulged something about me I wished he hadn’t. I did artwork. But not anything I could bring myself to show people. I buried my smutty drawings in the toy chest, though my grandmother, on her cleaning rounds, tended to exhume them, to my eternal shame.

When I met Harvey Pekar of the bushy brows and glowering demeanor, it was a melding of hearts and intellects. I saw it all now perfectly, how Marty and he didn’t meld. I rode my bike home (I’d lost my driving privileges from driving drunk) imagining Marty’s carnival-whistle, whoopie-cushion orientation not working with Harvey. Harvey and I were simpatico. He asked me to come back.

I always competed with Lisa and Marty for the title of most successful writer. I lost on both fronts. Lisa published two novels through a small, gay press; she’s working on a third. Marty shot into the stratosphere. He authored a hundred little books, some about sports, some about entertainment and culture. It’s an amazing, prolific career. And he ain’t done yet. The most popular books so far might be The Great American Cereal Book and A Celebration of Animation: The 100 Greatest Cartoon Characters in Television History.

“He’s guileless,” my mother, with typical penetrating wisdom, used to say about him.

Naivete can be violated. Everybody’s innocence takes a beating.

But Marty’s retains a special shine. He’s been though failed relationships but he also has successes none of his siblings can point to. He’s the only one of us with kids. Two glorious daughters, each with an artistic bent. He’s the same lovable nut with them.

Martin Gitlin is a breath of fresh air. While I’m trying to establish my philosophy on life, he’s engaged in a Facebook discussion about what’s the funniest Three Stooges short of all time.

He always reminds me of what’s really important: that you enjoy the only life you’re gonna have on this earth, and for that I accord him the greater wisdom.