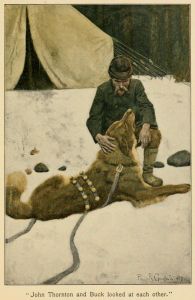 Buck and his benevolent new owner

My wife and I were having dinner in a Mexican restaurant with my new AA sponsor and his wife, and Russell was talking about having seen The Call of the Wild, the new movie with Harrison Ford and, from what I can gather, a computer-generated dog.

He said it was good.

Russell is a wise and discerning man. That’s why I asked him to sponsor me. I’d been “flying solo” for many years, which is not safe.

I asked him whether he’d read the Jack London story. In his soothing Texas accent, he said he had. I asked whether the movie had stayed true to the spirit of the tale. He nodded in the affirmative.

But lukewarm reviews reaffirm rather than dissolve my resistance. Not that CGI is all bad. I laughed myself into hysterics at Mouse Hunt, wherein Nathan Lane and Lee Evans chase a computer-generated mouse around a dilapidated mansion.

I don’t worry about laughing too much — though Barb’s nine-year-old nephew, whom we took to the slapstick film, thought I was deranged.

But I do worry about crying.

Because here I was going into a reminiscence about Buck, the much-abused dog who finally finds a sympathetic master in the frozen Yukon and, in an act of raw resolve to please John Thornton, pulls a half-ton sled to win him a bet, and I got choked up recalling this thrilling scene from the book. I shoved my nose back into the menu.

Stories and movies got to be a source of discussion. When Russell’s charming wife said Sense and Sensibility was her favorite movie, I complimented her on her taste, and chimed in with how I’ll never forget Emma Thompson as prudent Eleanor Dashwood, sitting at the seeming deathbed of her younger sister, Kate Winslet, who’s caught fever but is actually dying of a broken heart, and begs her, “Marianne, please try.” I had to catch myself again, as tears welled up.

What is wrong with me?

I was walking Rosa, my own stalwart dog, when I began to wonder whether the memoir that I began has predisposed me to sadness. But no, I was this way long before I started it. As with most misery-based autobiographical writing I do, its most redeeming quality seems to be its ability to break the crust of ego and be droll. Are all writers essentially entertainers? But sadness remains my starting subject.

It’s become an avalanche of memory. Watching Rosa sniff her way along, I remembered a moment in my life that may or may not make it into the book, but I thought I’d talk about here, on my long-neglected blog.

I had taken myself too seriously after getting ripped off in front of a girlfriend at Columbia University freshman year by Harlem street punks. I thought I had a right to soothe myself forever. I became a recluse, letting Dad pay for me to bide my time in New York, smoking dope and not going to classes. My academic progress slowed to a crawl. Dad bought that I would be okay, would even pay, during those doldrum years, for summer school and lodgings, which came to subsidizing sloth and alienation.

In summer of 1975 I lay on that bed, tears rolling down my face to Ray Charles’s “I Can’t Stop Loving You.” It came on regularly. “Third Rate Romance” by the Amazing Rhythm Aces, “Lido Shuffle” by Boz Scaggs, and “Car Wash” by Rose Royce also punctuated my junkie existence. DJ Alison Steele, the Nightbird, would come on to purr, “Come, fly with me …” She was about the only company I had.

So what does all this mean? Why am I still crying at the drop of a hat? I should have dried up by now.

But no. The damage seems permanent.

A few years ago I was in Cleveland and driving around in a rented car. I called into a good college radio station and asked for the original recording of the Beatles’ “Across the Universe.” They played it right away. Lennon’s double-entendre lyric, “Nothing’s gonna change my world,” which might be about relief or despair, you can’t tell which, poured into my car as tears poured down my cheeks. I had to pull over.

In the Andrew Roberts biography Winston Churchill, I read that the great leader was a sentimental slob who cried at movies. I didn’t feel so bad.

I get misty watching a well-made dog food commercial.

I’m glad I got off my ass after that New York vegetation and joined the hard fray of life. That came with its share of agony, but it taught me laughter, which my tank was low on.

Between laughing and crying, you know which one I’d rather be doing.

Lee Evans and Nathan Lane, thwarted by a CGI mouse